Smudge sticks are derived from Native American culture, where they are used in ceremonies to cleanse and bless people and places. The sticks are usually made up of dried sage but can be made with many other combinations of dried herbs and flowers like lavender, rosemary, thyme, or any other scents you prefer.

When smoldering, the sticks give off a rustic aroma that’s calming and pleasant. Here’s how to make your own DIY smudge sticks to freshen your home. 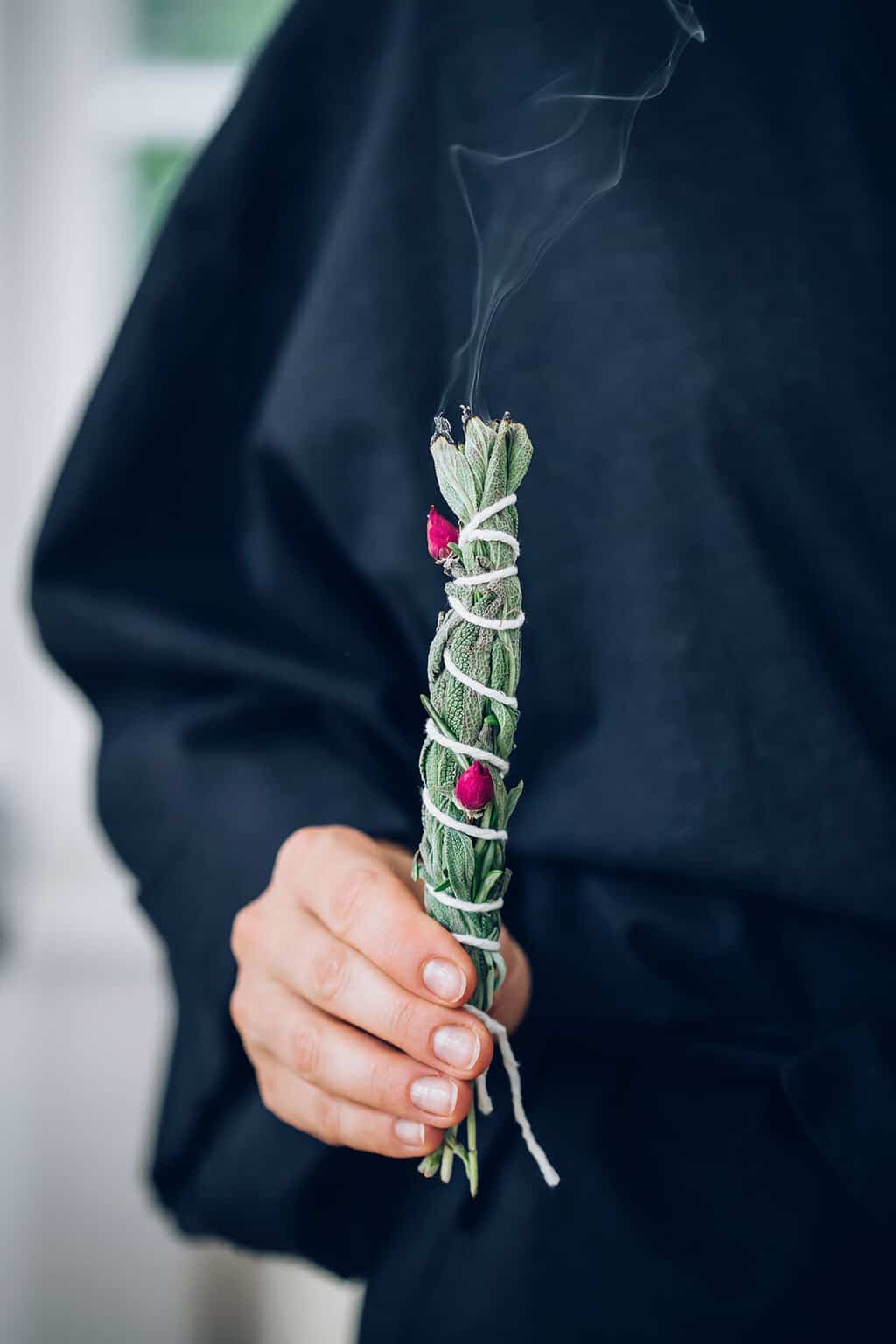 Derived from Native American ceremonies to cleanse and bless people and places, smudging is the practice of slowly burning herbs and flowers in a space. Now science is proving that smudging acts as an antiseptic to literally cleanse the air.

In fact, a 2007 scientific study published in the Journal of Ethnopharmacology found that medicinal smoke could almost completely eliminate bacteria in the air within a confined space. One hour of burning medicinal smoke reduced airborne bacteria by 94%, and the purifying effects lasted for 24 hours in a closed room.

How to Make DIY Smudge Sticks

While they might take a little more elbow grease, homemade smudge sticks are just as potent as the store-bought kind, maybe even more so. We usually think of sage as being the herb traditionally used for smudging, but different herbs carry different properties: some medicinal, some cleansing, and some just smell nice (I’m looking at you, lavender).

And making your own smudge sticks lets you customize the herbs to suit your needs and preferences. Some traditional smudging herbs are:

But feel free to add:

Since the purpose of smudging is to cleanse and freshen a space, choose herbs that you love the smell of and that feel right to you.

You can make DIY smudge sticks using bundles of both dried and fresh herbs and flowers. It’s a little easier to work with fresh because the stems are less brittle, so you can work it into any shape you like—but dried have their benefits too!

You know that lavender plant that you forgot to water? Don’t just toss it, strip the dried lavender, or you can use whole stems, to make smudge sticks. 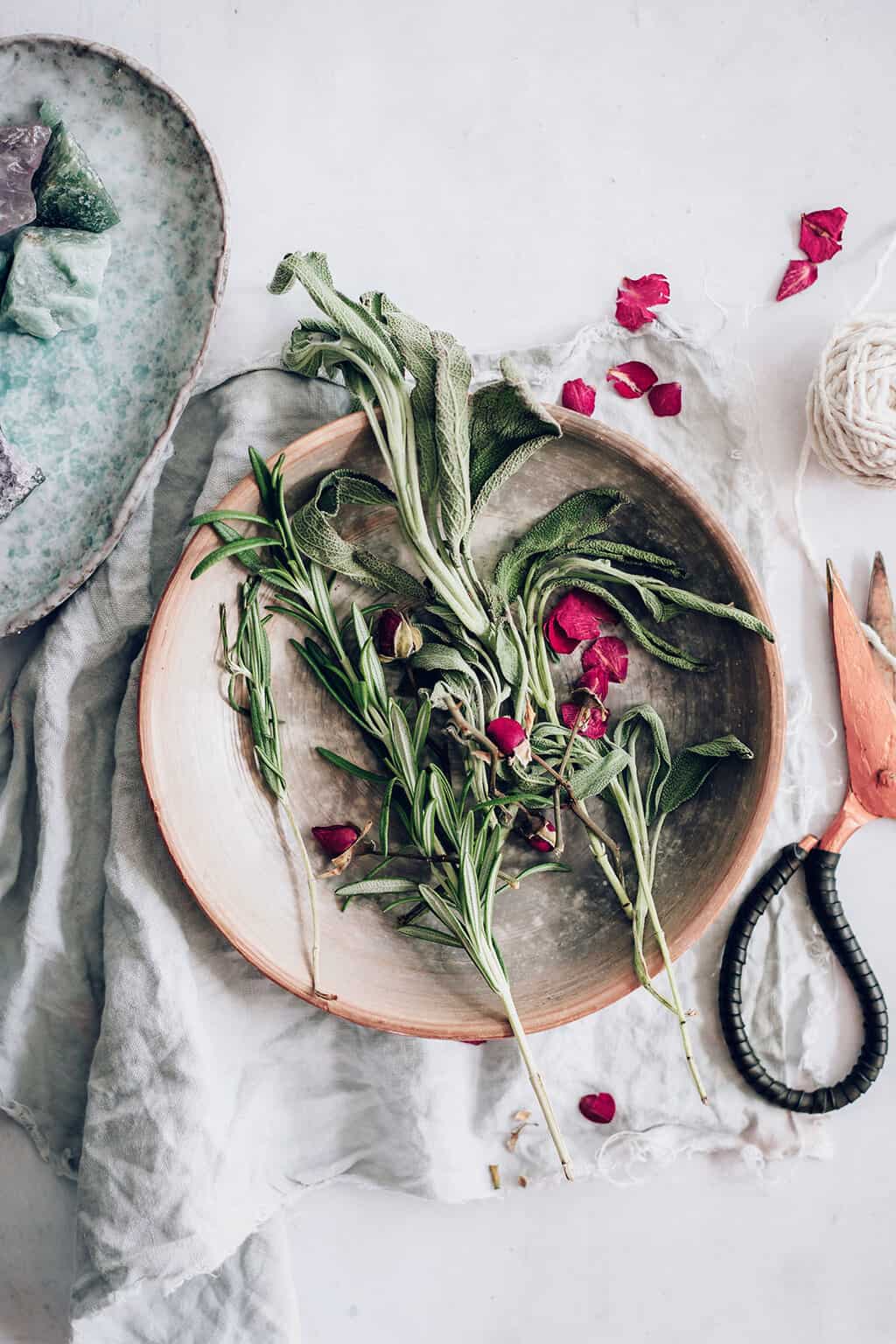 Layer your ingredients, positioning the bases of the largest leaves (or stemmed herbs) at the same level as one another. This makes the binding process a bit easier. 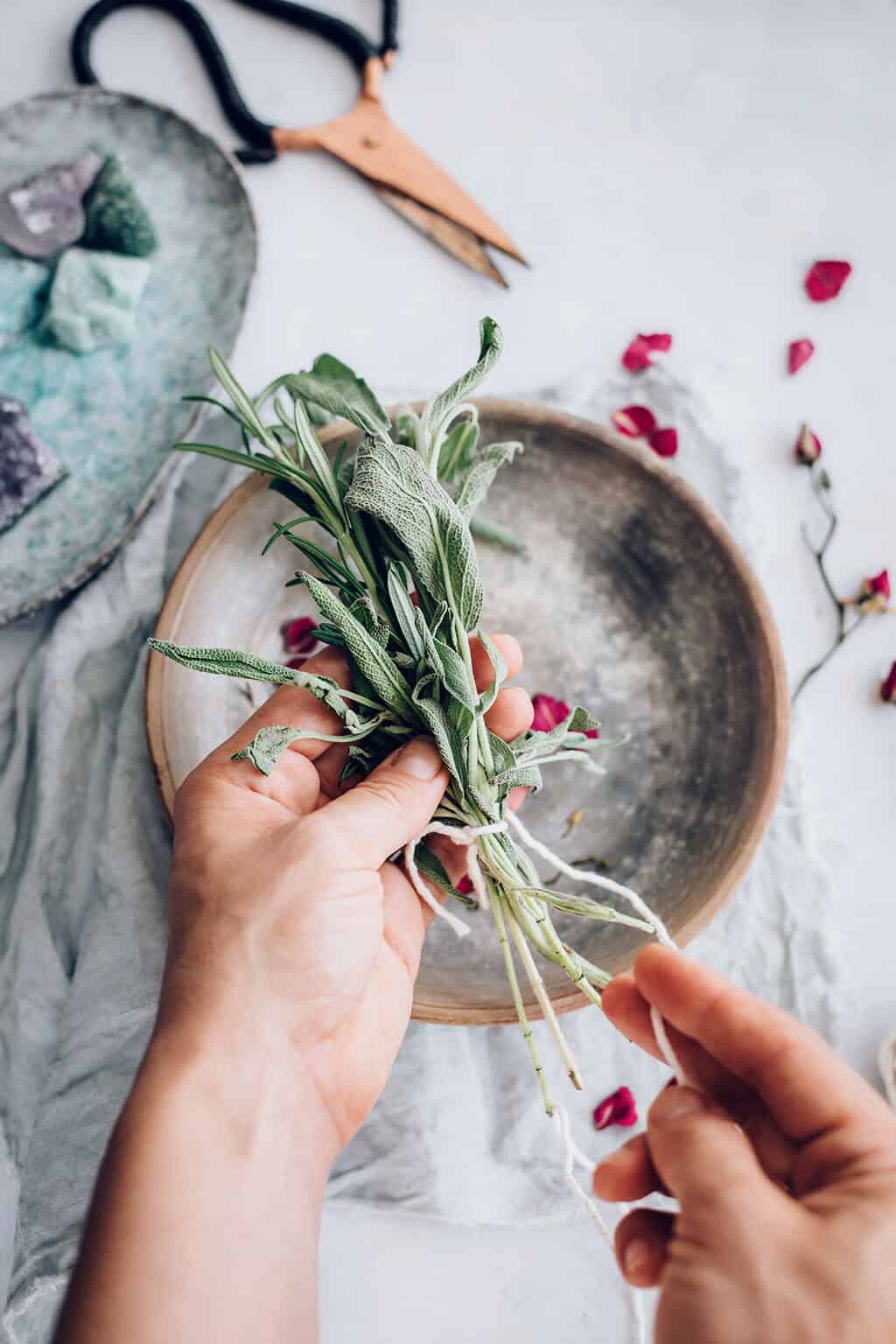 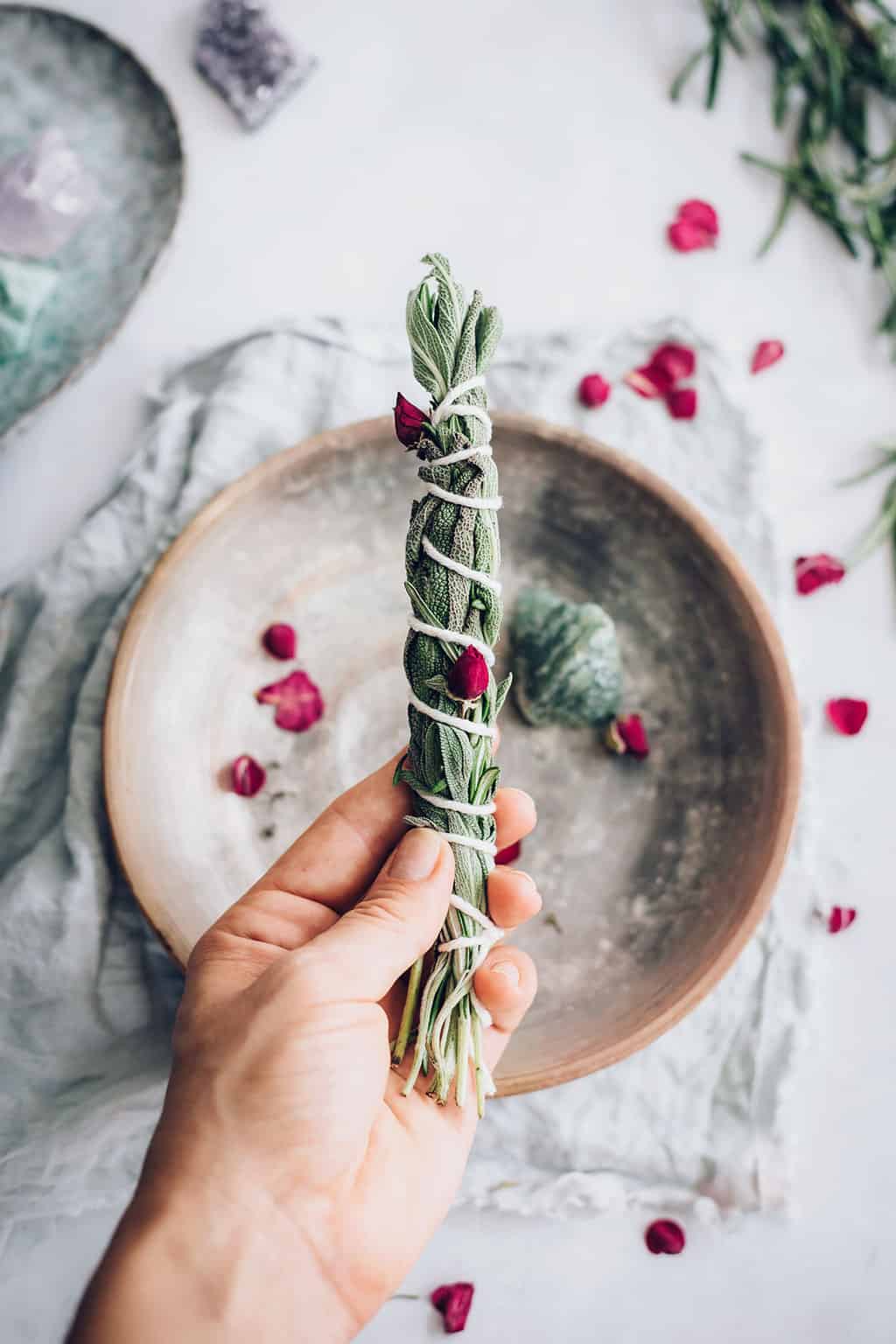 With the long end of the string, begin to wrap the bundle tightly, spiraling up towards the top of the bundle. Fold in any stray sprigs, tucking them under the string as you go.

Once you reach the top of the bundle, continue wrapping, crisscrossing the twine as you head back down toward the base. Tie the loose end to the original knot at the base of the stick. 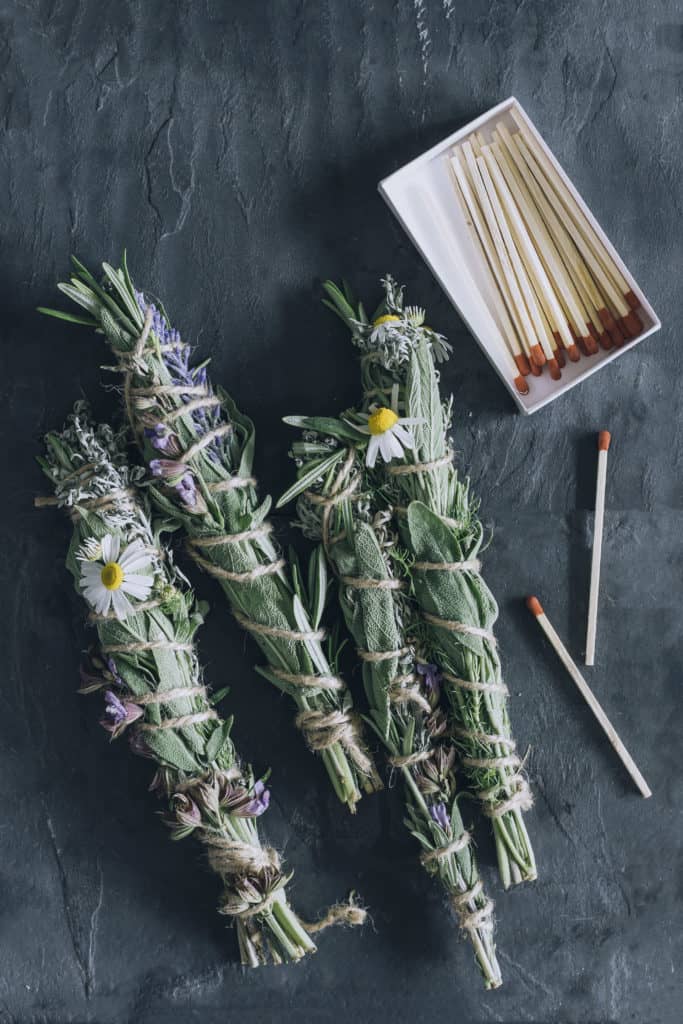 For best results, hang your DIY smudge sticks upside down in a sunny spot (I secure the twine to a windowsill), and allow at least 3 weeks drying time.

When smudging, light one end of your sage bundle with a match (not a human-made lighter). Blow out the flame, and let the end continue to burn.

Fan the smoke into the corners with a feather as you move around the space. The smoke represents your prayers, wafting out into the universe and calling on the energy of spirit animals and the elements of earth, water, air, and fire.

Place the still-burning bundle or stick into an abalone shell. A glass or clay bowl also works.

After you smudge, throw open the windows to help get rid of any negative energy. Keeping windows locked tight traps both stale toxins and negative energy inside the home. If the weather allows, throw open some windows and let the breeze refresh your home and fill it with clean, positive energy.

How often to smudge your home

I smudge seasonally as a way to clear out the old energy and welcome the new. But you can smudge monthly or weekly if that feels better to you. If you prefer to smudge on an as-needed basis, here are a few times smudging really comes in handy:

– When you move to a new home. Smudging can help cleanse the energy from the previous occupants, getting rid of old psychic residue and any bad juju.

– When you’re feeling upset. Some events, whether it be a fight with your spouse or just a bad day, can create negatively charged energy that lingers in your space. Smudging helps to clear that negativity so you can move on.

– To make room for new beginnings. I break out the smudge stick whenever I’m ready for a fresh start. For me, that’s at the start of each new season, but it could also be on New Year’s Day, before starting a new job, after spring cleaning, or when a roommate moves out.

What’s the difference between a smudge stick and a Palo Santo stick?

White sage was used in North American tribes, while Palo Santo was more often used in Central and South America. The materials are both considered to have cleansing properties but are used slightly differently.

In Spanish, the words palo santo literally mean “holy wood.” Harvested from the fallen branches and twigs of the tree found throughout South America, Palo Santo was used in ceremonies to combat negative energy and cleanse a space. Use Palo Santo when you want to move negative energy out of your home and surroundings. Energy healer Durek compares burning Palo Santo to “psychic bug spray.”

California white sage has been used by Native American tribes for rituals and prayers to bring balance and peace to a space and fresh energy into your life.

Where can I find fresh sage?

You can often find fresh sage at the grocery stores (I have found small packs of it at Kroger, Publix, and Whole Foods in the produce section next to the other fresh herbs). Or you can find large, potted sage plants at most greenhouses. If you’re not familiar with the different varieties of sage, check the label to make sure it’s white sage.

How do you light a smudge stick?

Hold the tip of the smudge stick at a 45-degree angle in an open flame (a match is recommended, but if you don’t have one, a lighter, candle, or even a gas cooktop will work). Once the smudge stick catches, gently blow out the flame so the herbs are smoldering and smoke is actively rising. Hold the smudge stick over a ceramic bowl or abalone shell (to catch any ashes) while you gently fan the smoke throughout the space.

How should I put out my smudge stick?

Either you can place the smudge stick in a fire-safe bowl away from anything flammable and, while keeping a close eye on it, allow it to slowly burn itself out (I can’t speak for all smudge sticks, but mine eventually go out on their own after a few minutes). Or place the lit end under running water for a few seconds, then lay it somewhere the herbs can breathe and dry out thoroughly.

Can you reuse a smudge stick?

Definitely. Once your smudge stick has dried out, feel free to reuse it until you can no longer hold it comfortably.

What’s the best way to incorporate small flowers and herbs into smudge sticks?

For things like rosebuds, lavender sprigs, and small herbs, let them dry out a bit, so they hold their shape. Once they feel nice and sturdy, I create my smudge stick first (tie off the twine and everything), then go back and tuck the flower buds and small herbs into the bundle where they feel secure.

Are you supposed to burn the whole smudge stick at a time?

You certainly can, but I don’t. Not only would that take a long time, but I don’t think it’s necessary for cleansing your space. I let my smudge stick burn for about 10–15 minutes (while I walk from room to room) before extinguishing it and saving the rest for later.

Do I need to say anything while using a smudge stick?

You don’t need to say a prayer or speak out loud to harness the effects of smudging, but it is important to have an intention in mind. As you walk around your home, visualize the old, stagnant energy dissolving and fresh energy taking its place. You can also speak your intention out loud if you prefer, but it’s not necessary.

I’m sensitive to smoke. Can I still smudge?

If you’re not a fan of smoke, for whatever reason, you can still cleanse your space by using air cleansing essential oils or with a Palo Santo room spray. When combined with energy-clearing ingredients like sea salt and white sage essential oil, Palo Santo creates a potent room refresher that acts as a smokeless alternative to traditional smudge sticks. 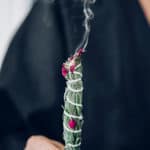 You can make smudge sticks using bundles of both dried and fresh herbs and flowers. It’s a little easier to work with fresh because the stems are less brittle, so you can really work it into any shape you like,—but dried has benefits too! You know that lavender plant that you forgot to water? Don’t just toss it. Strip the dried lavender or use whole stems to make beautifully fragrant smudge sticks. 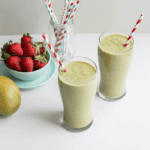 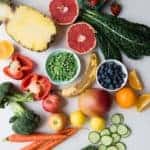 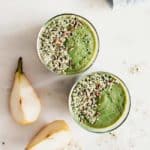 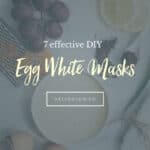 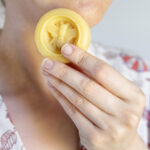